In my previous post about modeling Amtrak, I wrote the following:

"Next post, I will go into more depth of the consists needed, the prototype cars, and models available, but I want to start with an overview of the issue."

We will hit the consists and talk a little bit about the prototype cars this post. I'm going to save the models for an additional post later on, as I want to take some pictures and make some other documentation available to cover that subject accurately. I've cover the locomotives in an additional post as they are owed an exclusive look, in my opinion.

Generally, you can count on the long distance trains to have a mix of sleepers, a kitchen/diner car, a baggage or two, then coaches and possibly a lounge/snack car.

You might see observation cars (either of the dome or blunt end variety), express cars, dorm cars (usually an older sleeper for the crew's use), and maybe some private varnish at the end.

The shorter distance trains (sometimes called regionals) normally will only have a couple of coaches, and a lounge/snack car. You might see an express car sometimes, and a couple of them have apparently had baggage cars, but normally they will be straight Amfleet cars.

Finding exact information about consists has been a bit tricky and to date, I have only been able to track down a few thanks to Jim Langston's Amtrak clinics. Here are a couple of consists from his clinics that would cover my modeled area: 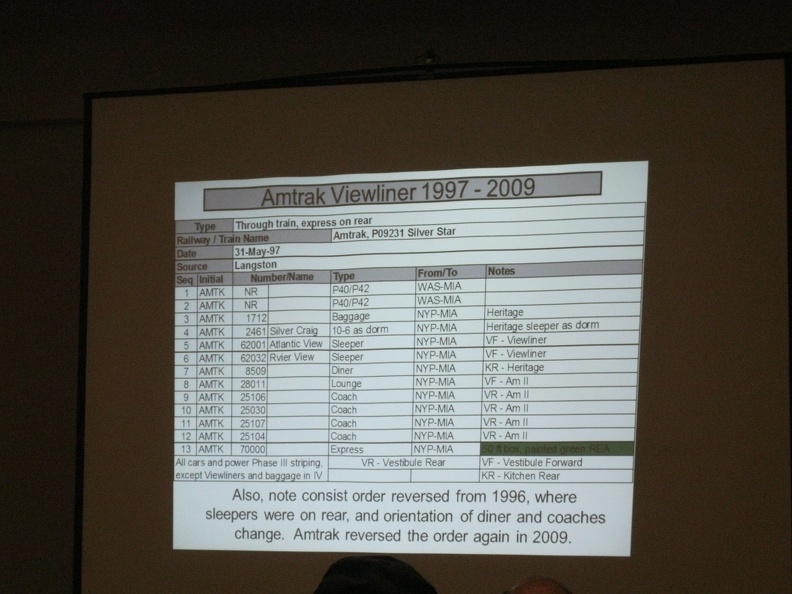 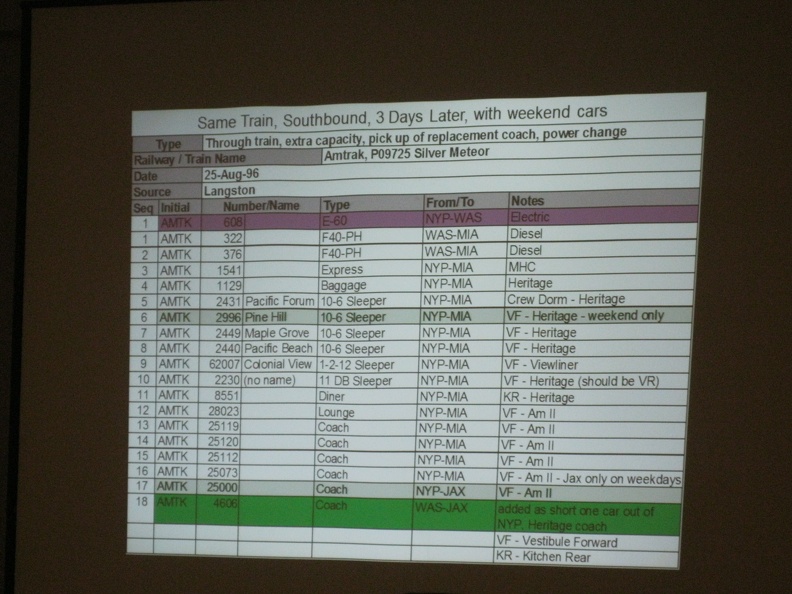 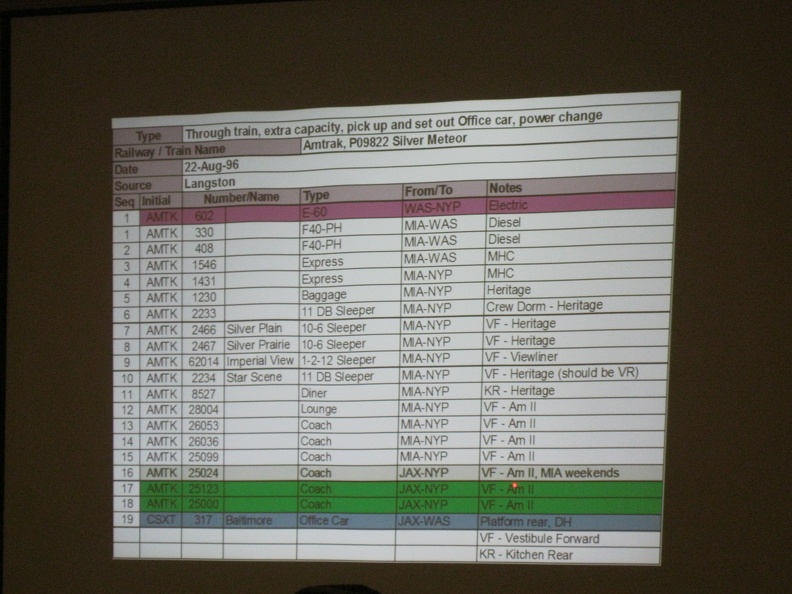 These snapshots only cover the long distance trains; which makes some sense as Jim is out of the Jacksonville area (IIRC). As to try to find out what there was on the regional and other trains, you are forced to scour the net for pictures, turn up books related the subject area and connect with railfans who might have additional information.

A nice thing about the prototype cars: there are pictures galore all over the place so finding examples is easy. A not-so-nice thing: Being able to know when and where particular cars were introduced to service, and when they were retired can be a tricky subject. One resource that has made it better is the book, Amtrak By the Numbers which lists just about every locomotive and car they've used. It includes when they were built, bought or acquired, if they were renumbered, what happened to them and the like. An invaluable resource and for $75, well worth it if you take your attempts seriously. In the time frame and location I model, a couple of car types will cover the majority of what I need to be concerned with: Amfleet (both I and IIs), Heritage (aka cars adopted by Amtrak when they took over passenger service in May 1971 from the railroads), and Superliner.

Amfleet refers to the cylinder shaped, single level cars in current use; they are primarily coaches, but some lounges and cafes exist among them. Keep in mind two series of these were built, both by the Budd Company. Wikipedia has a decent overview and typing Amfleet into google will give you results for days as well as images. I don't myself have a good Amfleet picture handy, so I'll have to take some an update this later.

Heritage cars are what Amtrak inherited from the railroads in May 1971 when Amtrak took over passenger service for a majority of the railroads. There were a few holdouts until later, but 90% or more became Amtrak. These cars were a mix of coaches, sleepers, baggages, diners, etc that were built from the 1930's to the 1950's. By the 1960's, not many railroads were spending money on new passenger cars, but post World War II, many railroads spent some serious coin on buying new varnish. I've read that Amtrak looked at 3000ish cars and took less than half; 1200 is what Amtrak themselves cite here. Somebody was using their noggin when this was done and took only stuff post WWII built (1946 and later); most of the cars were built by Budd, with a good seasoning of Pullman, ACF, and St Louis Car. Now, when Amtrak got these cars, they were all steam heat, as that was the standard from the previous age, but going forward this ended up being a big problem. Starting about 1977, Amtrak kicked off a rebuilding program to convert the cars to HEP (Head End Power) for climate control, lighting, and similar needs. Lots of history in these cars and a good portion of these are still plying the rails over 40 years later. Supposedly, Amtrak will be replacing these starting 2015, but I'm going to guess that is budget driven, so we will see what happens.

The Superliner cars are two level cars that were inspired by the Hi-Level cars that Budd built for ATSF beginning 1954 for El Capitan service. Amtrak got a bunch of these (and according to wikipedia, 5 are still in service as I write this in 2014) and then commissioned the Superliners from Pullman-Standard. Now, these cars are pretty darn tall (16' 2") so they are excess height, which restricts them from being operated in many corridors that Amtrak services; most notably the Northeastern Corridor. (Which means from Washington, DC to Boston, MA). We see them in Richmond due to their use on the Auto-Train, which originates in Lorton, VA, south of Union Station in DC and the height restrictions in the First Street Tunnel (17 foot clearance). Like the Amfleets, the Superliners were built in two series, by two different manufacturers. One of the quick spotting differences are the trucks; the original series uses a German designed truck, while the second series uses a General Steel Casting truck and they are very different, even at a glance.
Posted by Rick at 9:00 AM