I am to the point now that I have just about run out of the Atlas code 83 turnouts that I have been using to lay track. Since the Acca yard as originally planned would take a bunch of #6s and #8s, I was looking to spend a fairly good chunk of coin just to handle that part of the layout. That doesn't begin to figure out what I would spend for everything on the upper level.

I am mostly happy with the performance of the Atlas turnouts that I've put down, though they aren't going to win any awards for visuals with the huge cast frog that includes nice, shiny flangeways.

I decided to move everything to #8s in the yard (SD90s and 89 foot flatcars aren't fans of #6s..) to give me the prototypical flavor and looks that go with modern railroading; my original plan was number #8s on the Arrival and departure tracks, and #6s, everywhere else, but upon further reflection, I figured all number 8s would suit me better.

With those thoughts in mind. I purchased a fast tracks #8 cross over jig. This jig will let me build either right or left turnouts, single and double (aka scissor) crossovers. I also purchased some extra quick sticks and extra PCB ties.

Everything arrived in good shape and I set out to start building some turnouts. I used Micro Engineering rail that I bought locally at Chesterfield Hobbies (I've just about cleaned them out of Code 83 ME rail twice); too bad they don't have any compatible ties. :( (And the ME ties I bought a bit ago don't work either, as they are too short to match up to Atlas flex track or to the ties and quick sticks that Fast Tracks sells.)

First two turnouts were learning experiences; I have to rework them as I didn't follow the directions exactly when I formed the stock rail on the diverging side. (It needs a slight bend or kink in it, just like most prototypical trackwork so the point fits in nicely.)

The next two have been pretty nice: 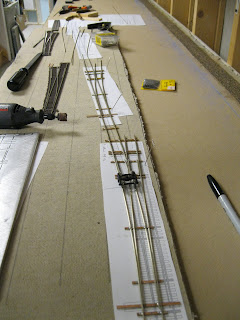 I built them as part of a yard ladder (the start of the A/D tracks) but it looks like my switch build area wasn't setup correctly to get the diverging routes on 2" centers, so I'll be cutting these apart and just connecting them with rail joiners. The bottom two switches in the ladder I've got laid out correctly, so I will be getting those done shortly.

Another couple of gratuitous pictures: 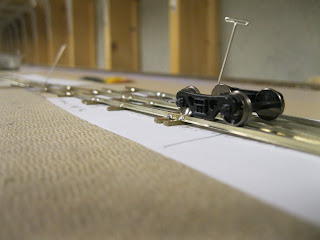 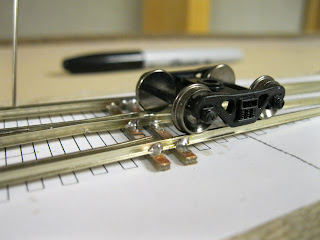 Here's a good overview shot of the first and second sections of benchwork that will support Acca yard. There is approximately 9" of space to get your hands into the staging yard, if need be. I have a couple of small under cabinet style lights to put in so that the yard can be lit up if need be. 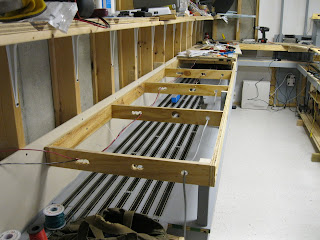 Here you can see the transition from the main lines into the yard limits area. The main line is the track farthest from you in this view, and you can just make out the ramp made of cork roadbed to put the main line higher up than all the yard tracks that will be laid directly on the homasote. 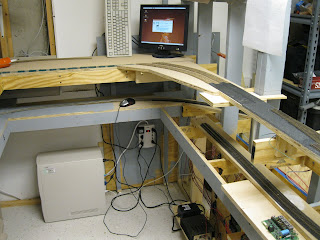 Here is the set of cross overs that allow trains to either bypass or enter the yard (Northbound) or to continue on the main or get to the switching area in the next photo after this. 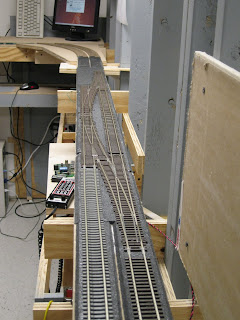 Chesterfield industrial area - 3 industrial spurs; right now the plans include a LPG dealer, a lumber yard/building supply dealer and probably an small cartridge plant. Spur #3 is out of frame to the left. Eagle eyed readers will note the crossover that seems to have an outlet to nowhere - that is actually going to go to the (relocated in this world) Southern States grain elevator that is just across the river from downtown Richmond in real life. 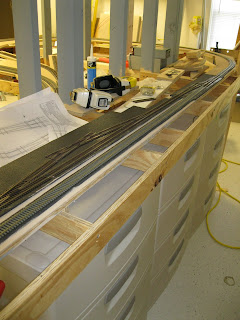 Next post will be about my use of the fast tracks turnout jigs and beginning to put track down somewhat manually.
Posted by Rick at 1:21 PM No comments:

Wow, I can't believe I haven't put an update in since December. Bad me!

Lots of progress has been made to the railroad:

Track has been placed from lower staging all until the main level yard approach. Feeders are in place on the main line so trains can run all the way.

Two of the four yard sections have benchwork and sub-roadbed in place and work has begun on the opening yard ladder for the A/D tracks via a fast tracks turnout jig.

I have a new camera and pictures galore to post once I get them onto the computer.

Early fall will be the first operating session at this point. (I made January, just not this January :) )
Posted by Rick at 11:27 AM No comments: