Made some progress since the last post and have a bunch of pictures to go through; hopefully I will get them sorted out fairly soon and figure out what I want to put up.

The turnback loop is completed for the second time; first time I hadn't drilled a hole in the benchwork for the switch machine wire and when I attempted to fix that, ruined the #6 that was there. $17 later at Chesterfield Hobbies for another #6, it is back together and working.

Have the first half of loop #1 on the helix glued together; going to start laying roadbed and track this week.

I've finished up the turnouts for the yard ladder and I'm waiting on a #8 double slip to complete the A/D tracks.

Op Session/Debug in going to be January still.

Couple of quick pictures:
New #6 on the reverse loop 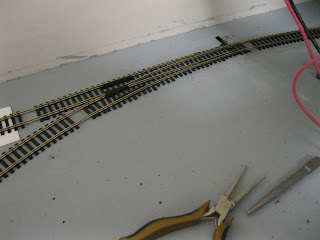 More Tortoises; this pair sits on a crossover, they are wired to throw simultaneously. I'm now about halfway through my 3rd 12 pack. (Yes, my wallet still hurts!) 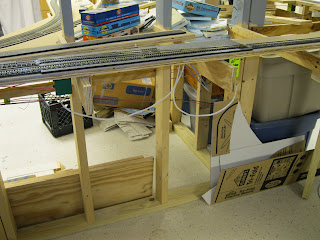 Beginning of the helix 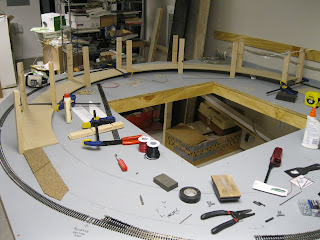