I held the first operating session this Saturday, the 25th of June. I had a total of 4 attendees on the railroad running trains.

Here's 3 of the 4 in one shot - left to right: Scott Lull, Keith Stillman and Mike Pulaski. 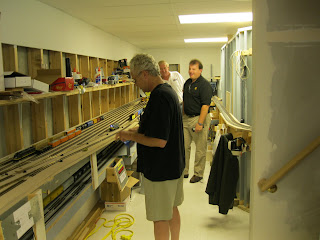 Our final contestant and intrepid yardmaster in the red shirt at left, Dick Munnikhuysen (hope I spelled that right!) 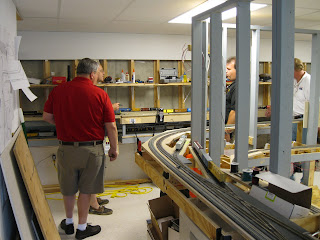 We ran a bunch of through trains, a few locals, 2 interchange jobs and 1 passenger train (both NB and SB versions). I didn't get pictures as we ran through, since I was acting as host, dispatcher, operator, question answerer and other sundry duties. Here's a couple of shots after we had concluded actively running trains:

Staging tracks filling up - this shows the loaded and empty trains, the intermodal, the Auto train (you can barely make out the F40PH facing us in the distance) and a mixed merchandise train. 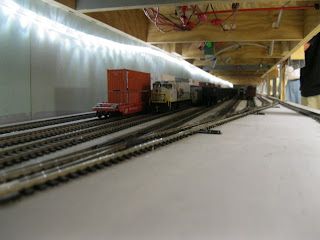 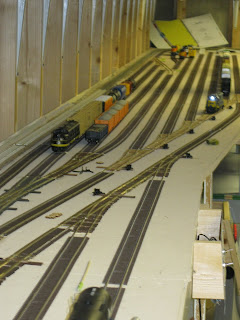 A few shots out on the railroad, with cars in industry spots; second shot is the interchange track looking full: 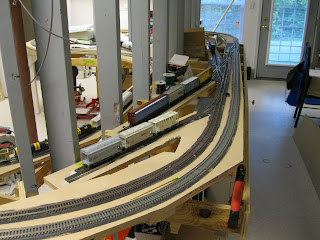 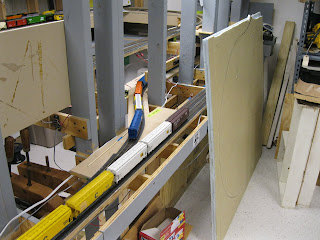 After we finished running trains, the crew sat down and we had a debrief on the session. The crew as a whole thought the railroad ran well, from a functional standpoint with only a handful of derailments, uncouplings and the like. We did pick up a nice short in the yard when a frog gap closed, but some work with a dremel and we were back running.

Since my Digitrax system includes only the duplex radio functionality, most folks had to run from UP5 panel to the next and we identified a few spots to install additional UP5 panels. Mike Pulaski was able to use the IR on his throttle to control his train and throw turnouts, which was neat. Turnout had to be either thrown on a DT400 or by the dispatcher. Keith recommended that some sort of toggle arrangement be setup so that the crew switching can throw turnouts for themselves and not bother the dispatcher. The operating manager took this item for research and action. A few staging turnouts ended up being reversed, so that closed was actually thrown, and those were noted for remediation.

The operating scheme worked okay for a first session, but we are going to continue to develop a car card based operation scheme. We have the card cards ready, but have been unable to develop the waybills needed.

Some additional power is needed to ease the need to reuse power sets and forgo a stop at the service terminal that would simulate getting refueled, resanded, etc. and give a more realistic feel for the delay in getting locomotives tied to a train and ready.

The double slip control was functional, but not intuitive. The electrical gang has that for review.

Next session will be in August; hopefully we will have a formal dispatcher spot ready to go, more cars on the railroad, car cards and waybills and a couple of signals!
Posted by Rick at 5:47 PM No comments:

Derelict in my blogging..

Well, the railroad is operating and the first session has already been run; a update on that in a separate post coming shortly.

I managed to lose my camera, so I don't have any pictures from the last update until yesterday's session, so I will just run down the work that has been done to get the railroad to this state.

Electrical
Additional feeders were connected, gaps were cut and blocks wired in preparation for the first session. Once the BDL168 breakout board I designed arrived, block detection will be available for the dispatcher. A couple of dead spots were found and rectified as well as test trains were run back in forth.

Trackword
The final 3 yard tracks were completed, thanks to help from Keith Stillman, who was nice enough to come for a weeknight work session. The drill track was completed and turnout controls were installed so that positive point control was ready in the yard. The double slip tortoises were wired up and a quick control panel was put together.

Creature Comforts
The basement bathroom was finished with only a couple of equipment delays and 1 leak, that was fixed after a new shutoff valve was installed.

From the last update, approximately 40 hours of work was put into the railroad and basement to get ready for the first session. Big thanks to my folks for help out here.
Posted by Rick at 5:39 PM No comments: