After some thoughts and discussion about how the layout works or doesn't, I decided that I needed to make the upper staging yard larger. Primarily, the upper level's staging is currently smaller than the lower level and it is also stub ended, which complicates the ability to get trains in and out.

I started by measuring the area I had with an eye to trying to offset a bit from the lower level to give the crews working the there a chance to see what they are doing. After doing that and figuring out that I could space back just a smidgen so I would still be able to maintain the minimum radius for the reverse loop I sketched a plan out.

I decided to embrace the idea of a Bellina drop at the end of the reverse loop to help move folks through that walkway. It would also give me a way to hide the supports too. 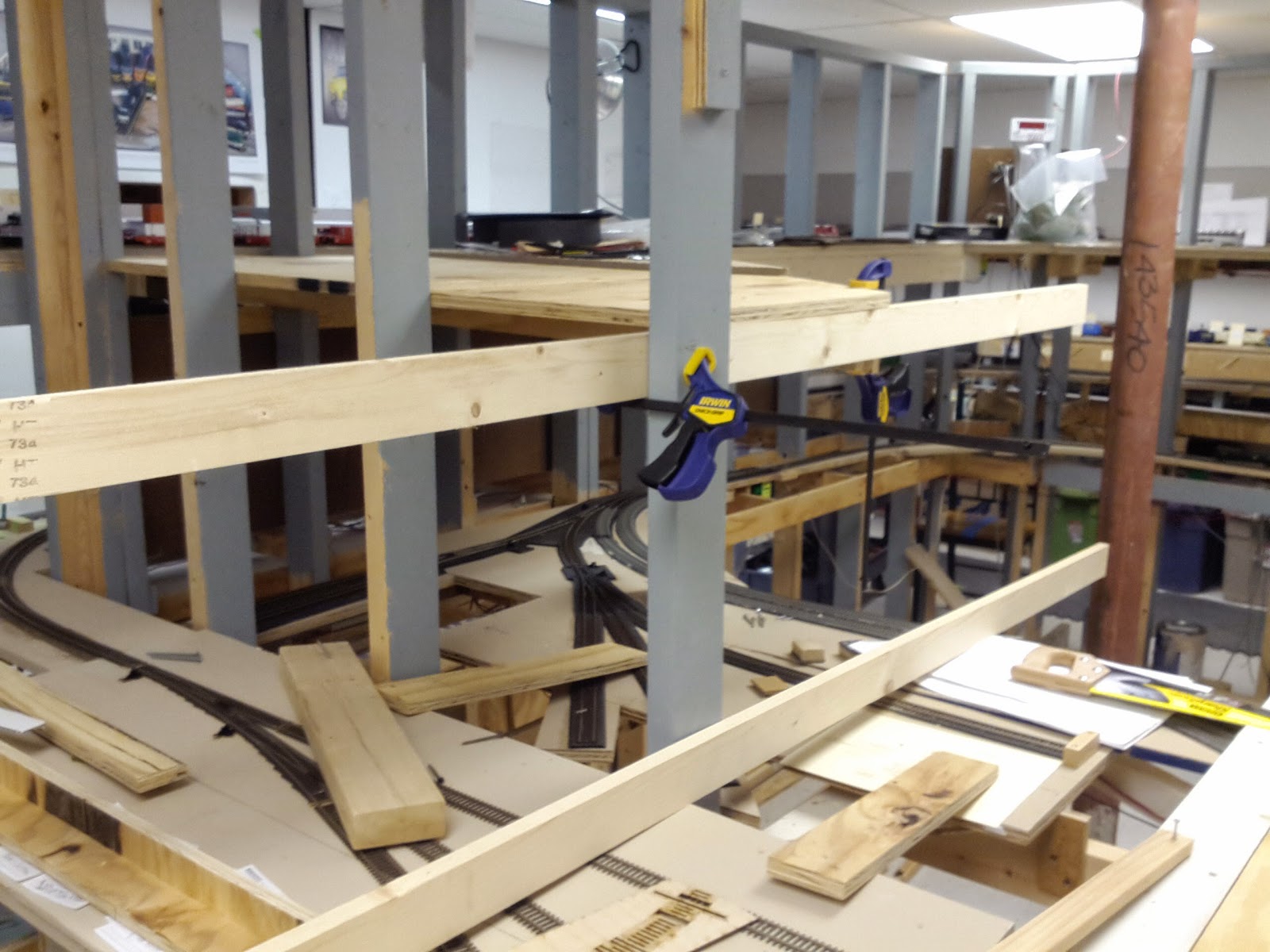 More about the car forwarding system

I've been a user of the car cards and waybills system of car forwarding since we started operations a few years ago.

I mostly created the waybills with the access based application that Dave Husman wrote that has a community on yahoo here. A couple were just done in MS Word or OpenOffice. The car cards are a mix from Dave's app and a few other applications that we used back and forth.

I finally standardized on Dave's app since it was much more easily portable from PC to PC since it is MS Access based.

One of the main issues was that I created the waybills over a period of time and the format I used per each step varied from lot to lot.

After the last session and some confusion on what should be done with cars, I went through all the waybills inside the app and standardized them in format. Once they were all set to be the same format; i.e. step 1 is always car coming onto the layout with next block defined, step 2 being delivered via local train x, and so on, I went ahead and printed them on cardstock instead of plain paper, hoping this will make them a bit easier to handle as well.

Time will tell if this solution works; I hope so. If not, I might go to single step style waybills.

I guess I can always try switchlists, but after spending time building card boxes that seems silly.

More posts coming this week; watch this space!
Posted by Rick at 6:16 AM No comments:

The full website, here, has been updated with additional pictures and content. I have been making a couple of changes to expand the operations and construction pages. I have also started on a page to document how I've developed my JMRI based CTC panel. There are some JMRI screenshots as well to help illustrate how the panel is put together.
Posted by Rick at 12:00 PM No comments: 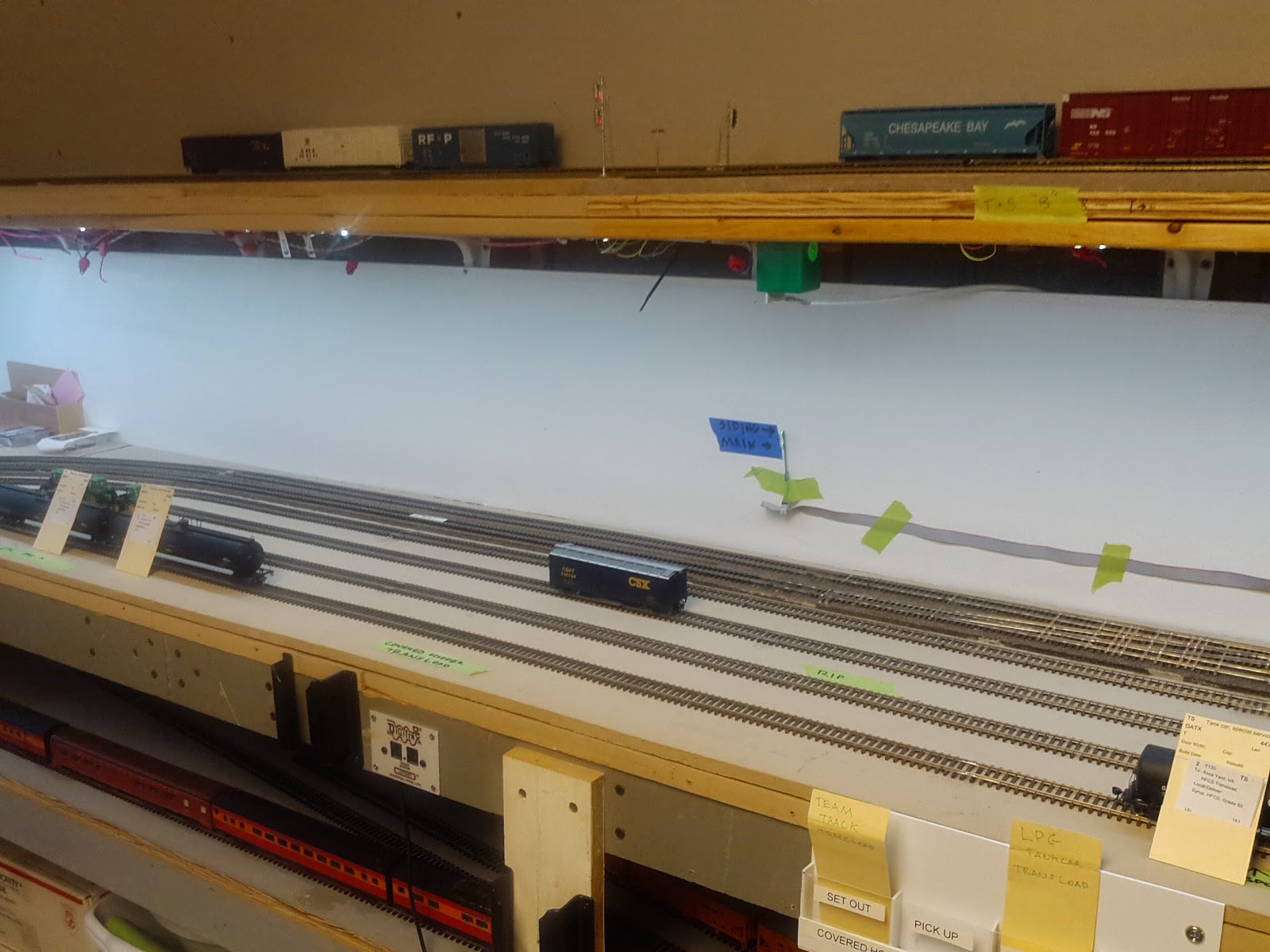 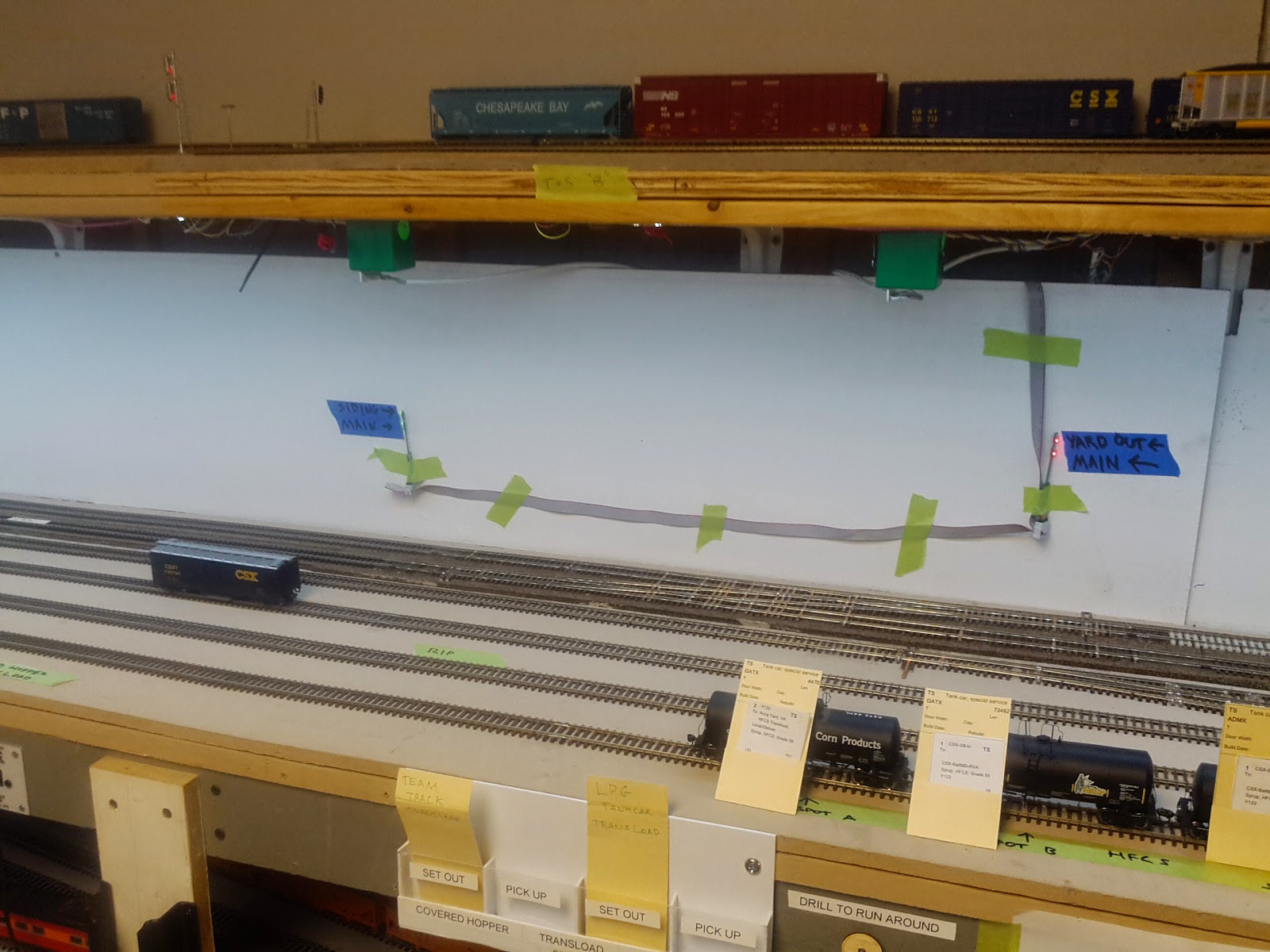 I took a couple of shots of this neat diorama, but this was the only decent picture so far.

Two Hulett unloaders from Walther's kits, track, office, and a large pile of taconite to unload.

Only issue was it way too clean to be a real dock area - those are always trashed and rundown. Be that as it may, an impressive effort and well received in Cleveland. 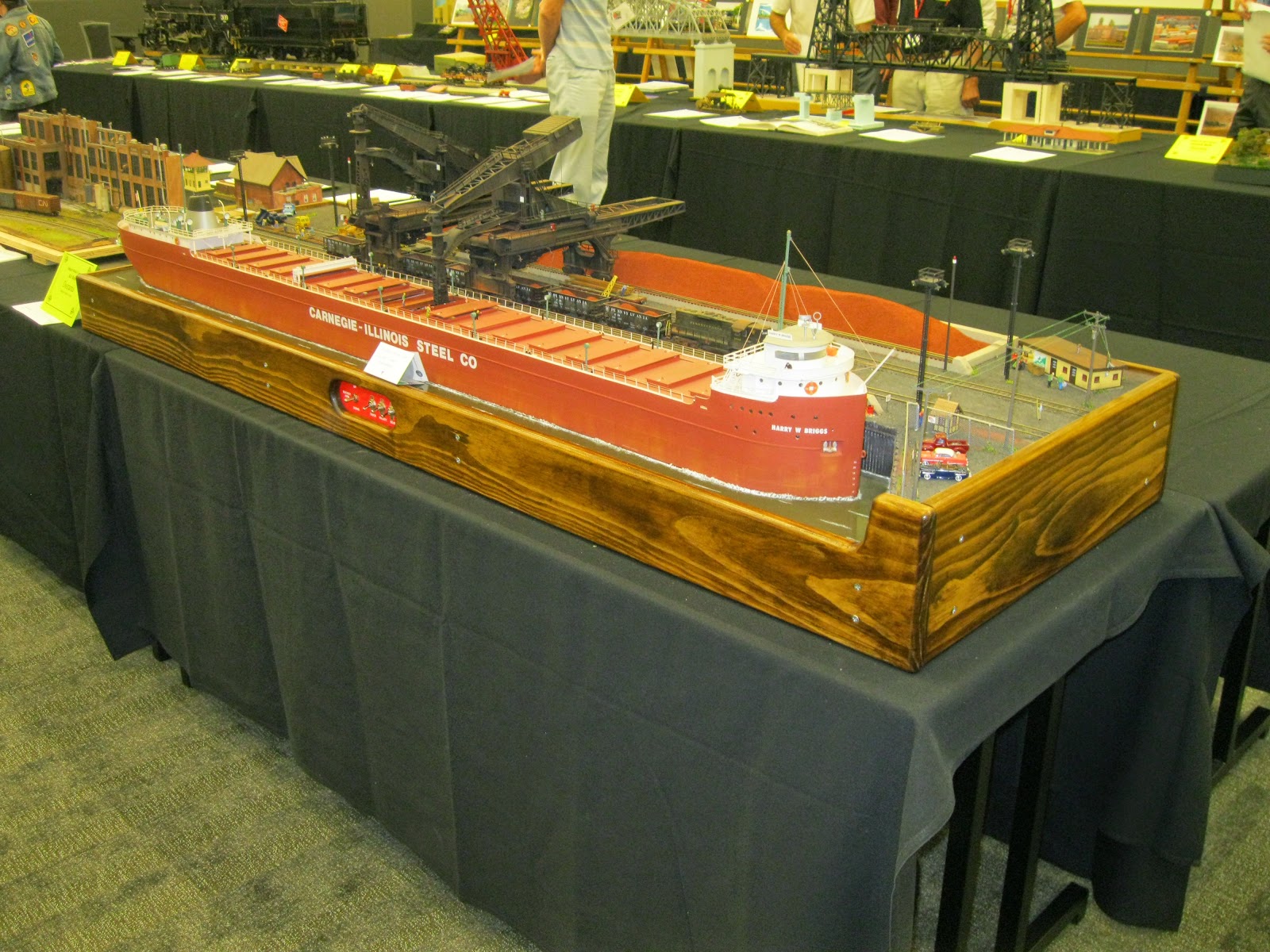 Another scratch-built structure of some note was this rotary coal dumper building. HO scale, made to be integrated to a layout, and operating as well.

This was another model that the NMRA magazine folks wanted to feature in the magazine, so I hope we will get to see more of this model in the future.
Posted by Rick at 10:19 AM No comments:

I figured that I would take the opportunity to highlight a few models from the past NMRA national convention that I found intriguing. I'm hoping to turn this into a short series, so watch this space for updates.

The first model, if you could call an undertaking like this a mere model, is a 7.5" gauge, 1.6" scale model of a Milwaukee Road 2-8-2 steam locomotive. 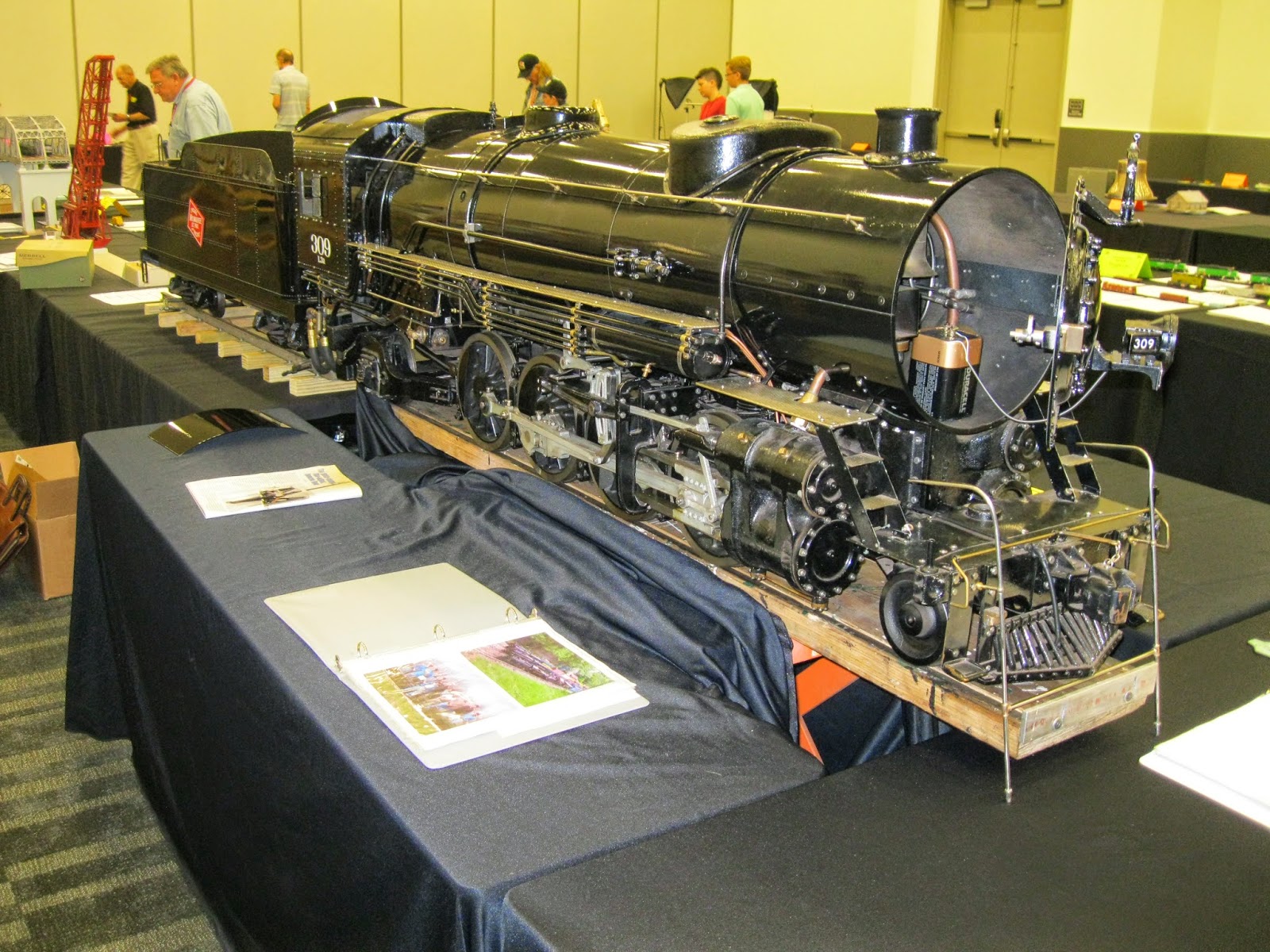 The pictures are not able to do this massive model the justice is richly deserves. In talking with the builder, Karl Kobel, this has been a 8 year quest that is is still not finished with; and he estimates at least another 2 years of work needs to be completed. 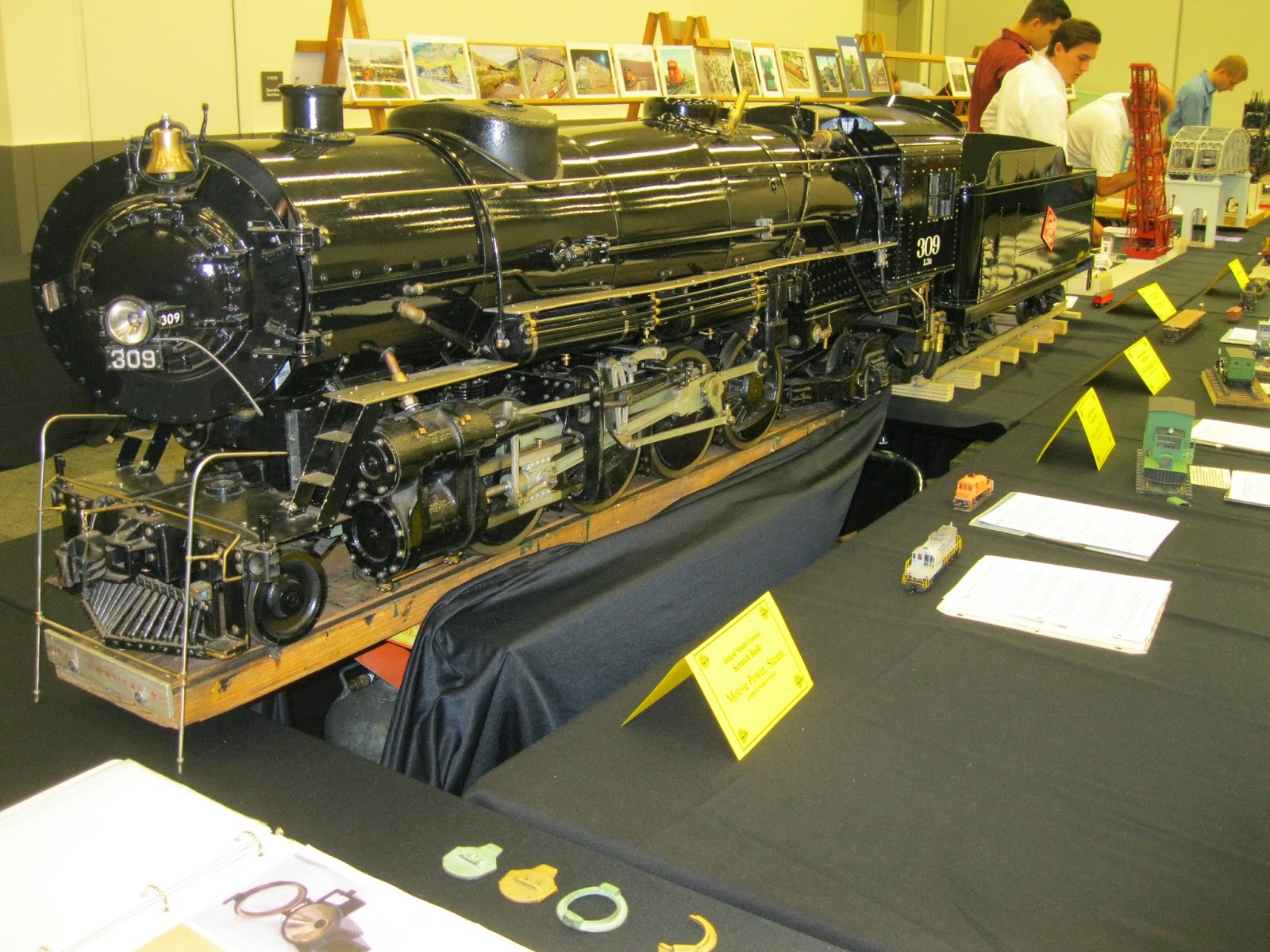 The amount of hand finishing and what I would call polishing touches are almost beyond comprehension. At the edge of the tender walls, he welded on stainless tubing to give the tender the correct and snag free treatment that an operating model cries out for. 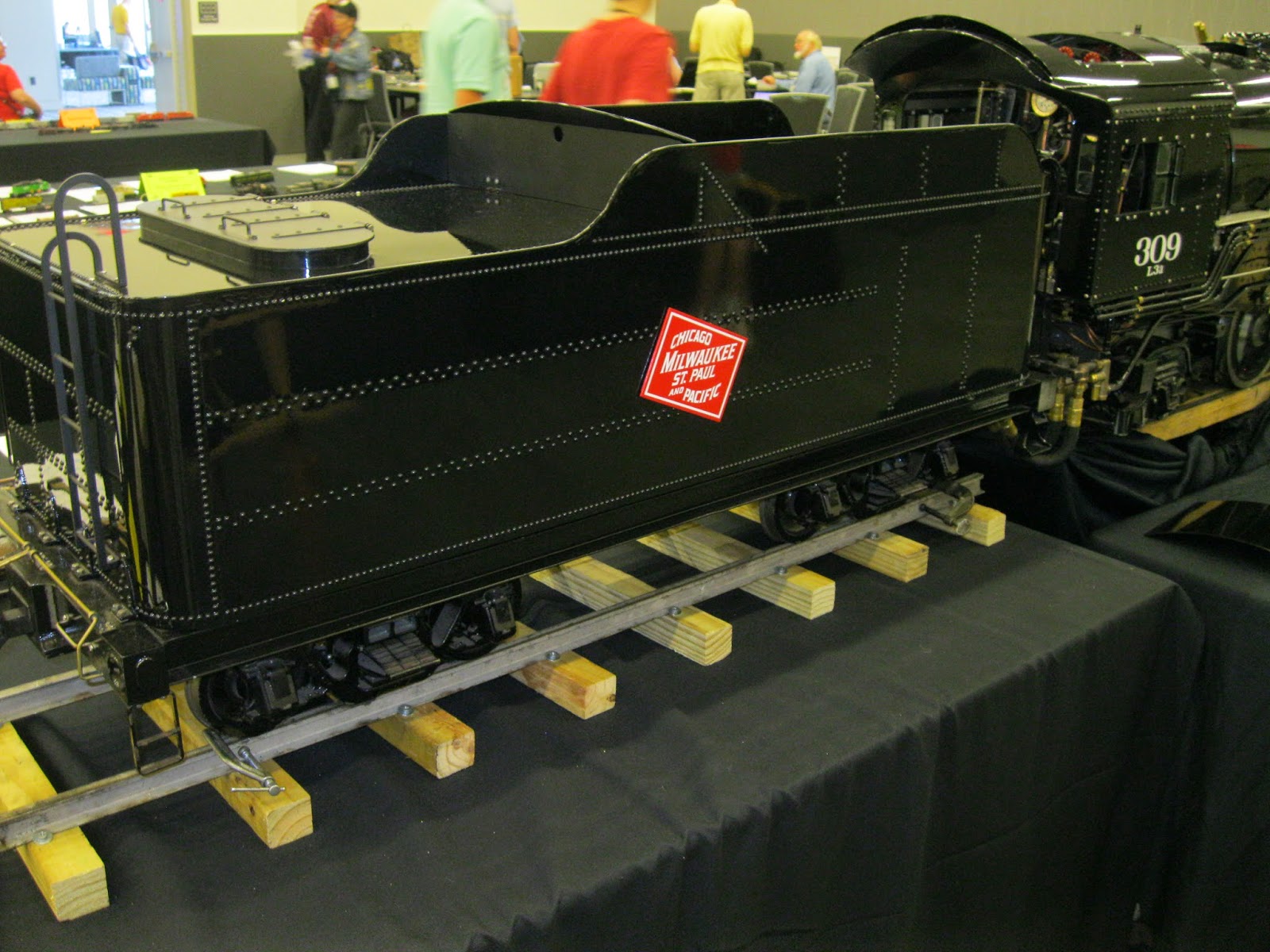 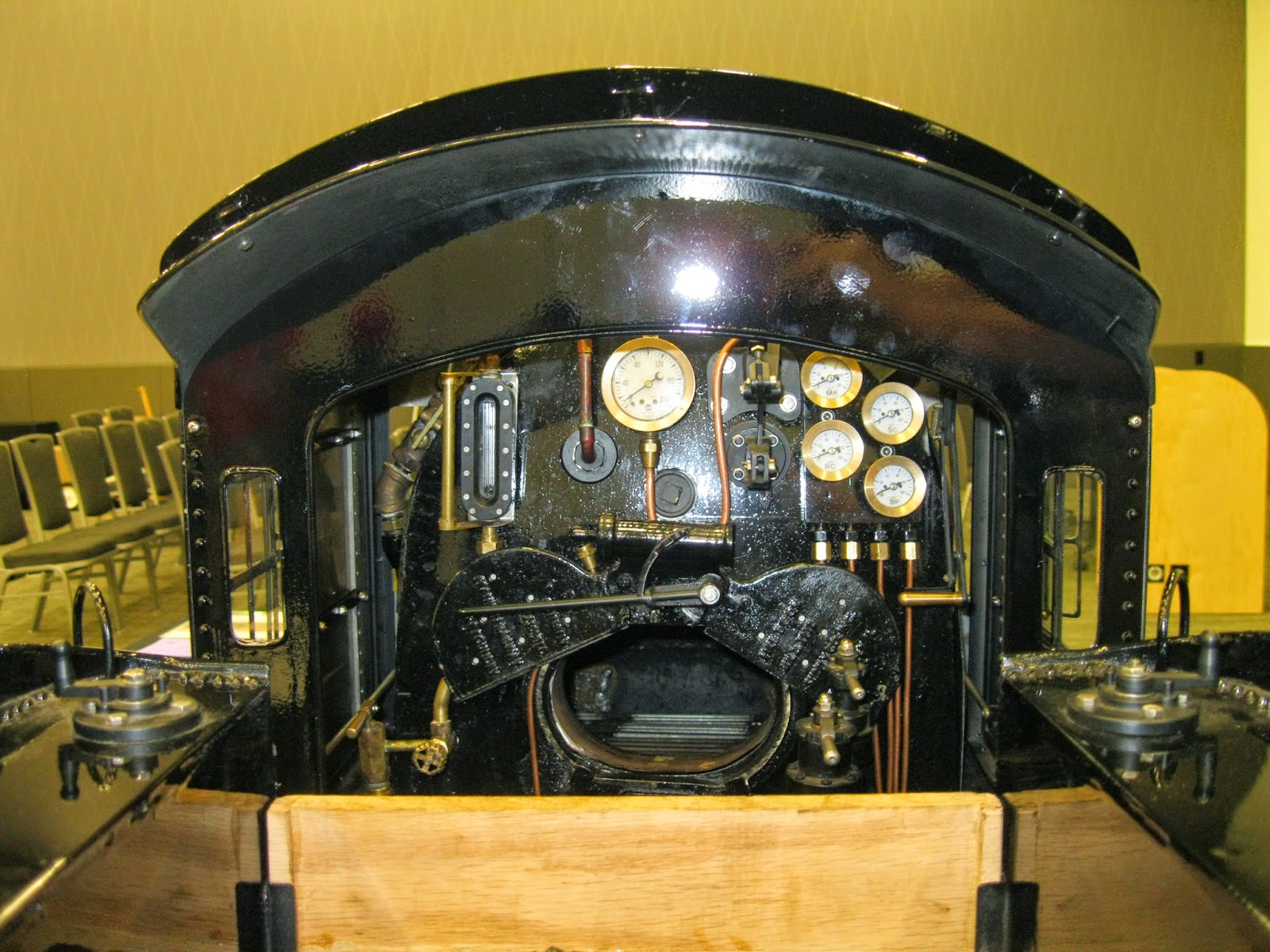 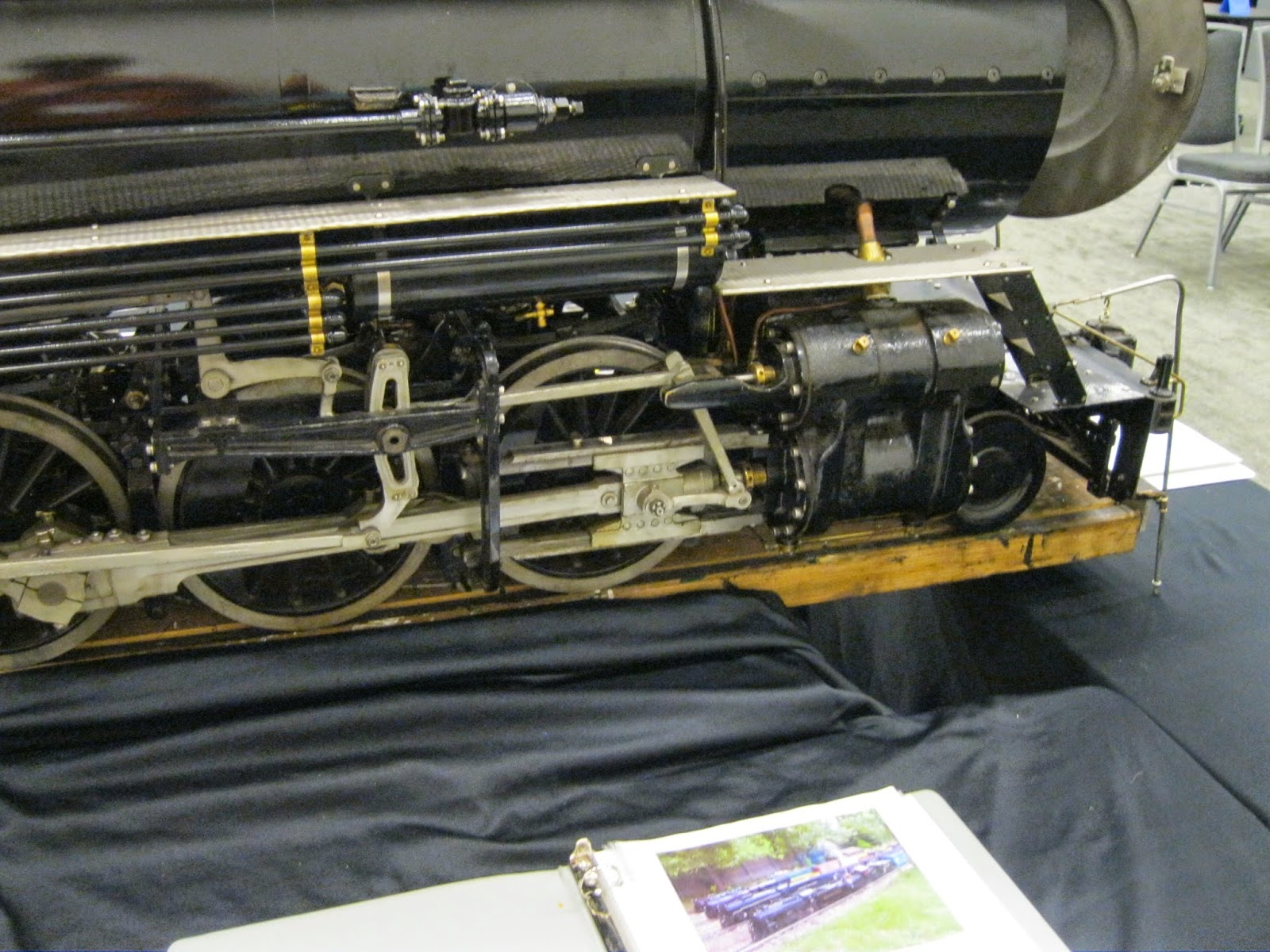 If I had to sum up this model in a single word, breathtaking would be my word. I am hopeful that we will be able to see this model featured is great detail in a future NMRA magazine article (I hope many articles), as the magazine's editor requested to work with the builder to feature this in the magazine. 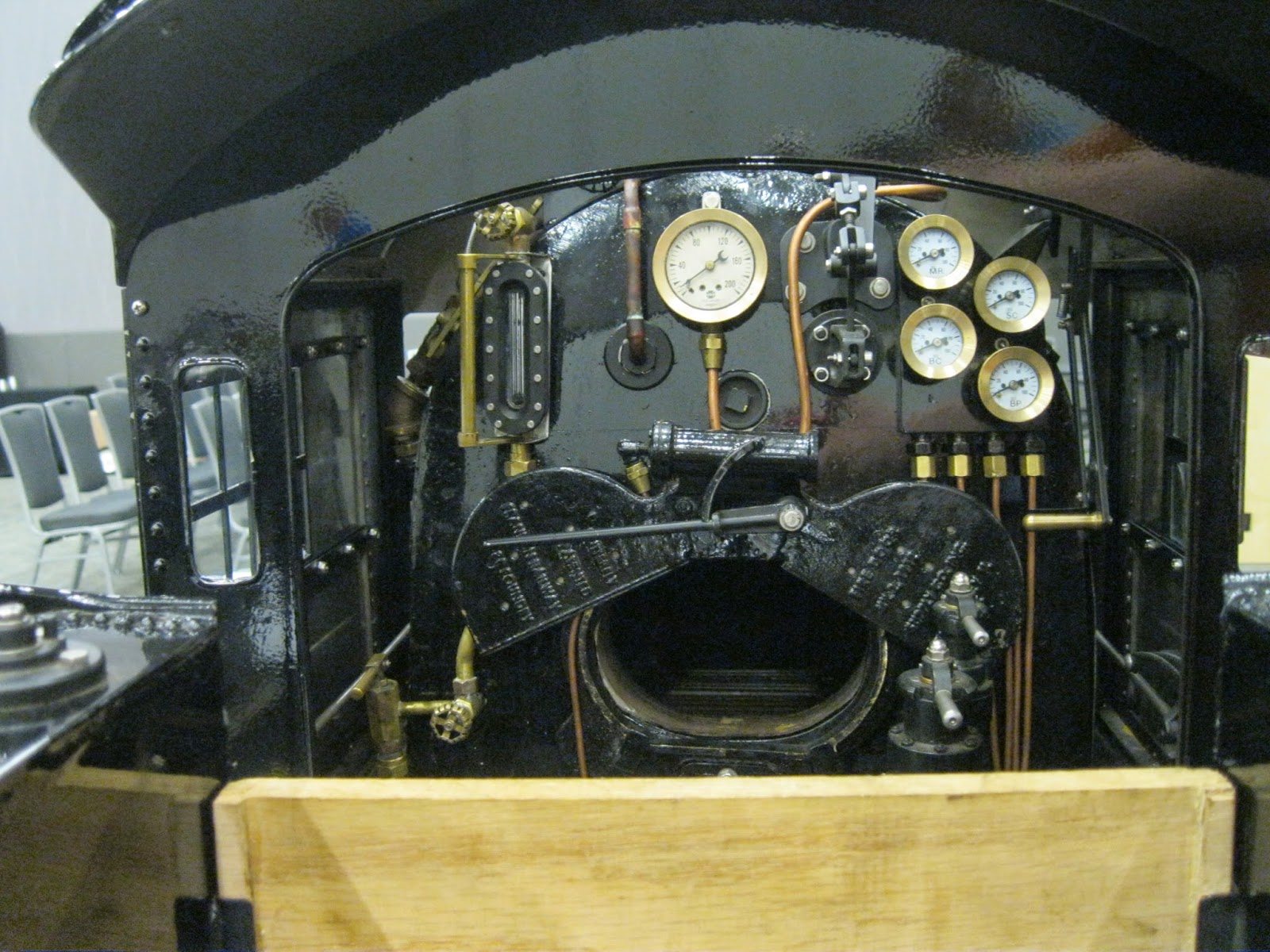 Interesting finds from the convention

Just a couple of quick hits from the convention:

A neat way to sense the state of a manually thrown turnout: microswitch spiked down next to the caboose ground throw that when the throw moves, depresses the contact. The microswitch itself connects back to anything that will send a loconet message; alternatively you could light an LED on a panel or set a signal to red. I have a picture from my phone that I will attach to this post to better illustrate. Hat tip to Brad White for showing me this. 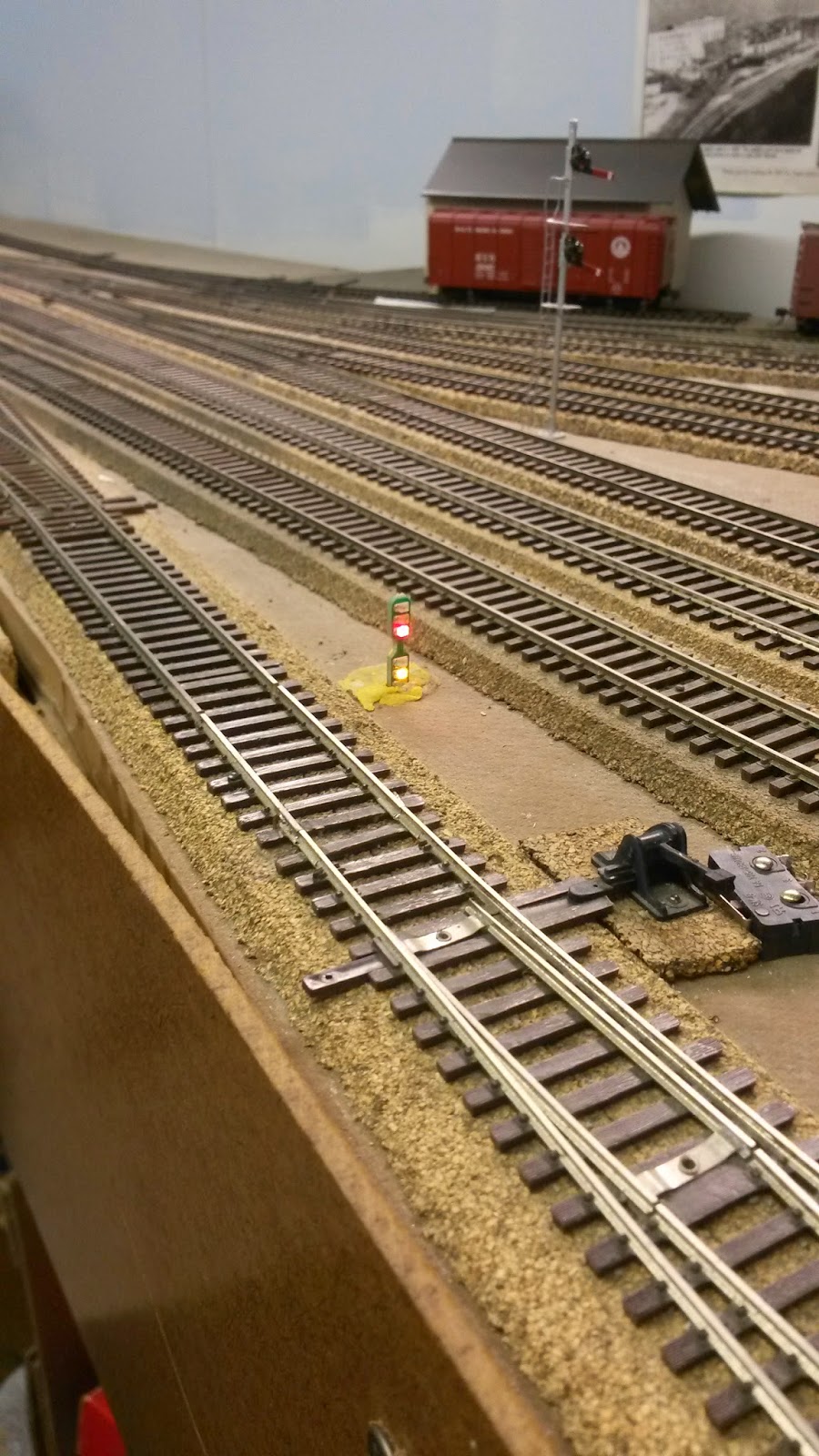 The OpenLCB/NMRANet project seems to have made an actual commitment to getting real production gear available within the next 18 to 24 months, with announcements coming at the next national convention. As a person that received a dev kit as part of the project and being very disappointed, this is good news. Trick is going to be the group actually executing. So far, I'd say that both RR-Cirkits and cpNode have beaten them to the punch.
Posted by Rick at 1:07 PM No comments:

Currently, the upper staging yard is stub ended. This matches the original plan I had drawn up.

After operating with it for a bit and also spending some time at the convention with a gent from the LDSig during one of their 'ask the expert' sessions, I have begun to rethink it.

Operationally, it is a sticking point and requires another operator to make sure that trains can enter and leave. It is also a bit shorter than the lower yard, which is an additional complicating factor.

The major reason that I had not had it follow the same footprint of the lower level was the fact that I did not want to impact sight lines onto the lower level too much; as you can't effectively offset the higher deck when you have to fit in a turnback curve. In tangent sections, you can eliminate a track or two and space it back, but a 30" radius curve is a 30" radius curve.

After a fair amount of measuring this past weekend and some other tests, I am going to build out the upper staging yard to be part of a reverse loop for tracks 6 and 7, with possibly 4 and 5 included while extending the stub ended 1,2 and 3 tracks.

This will also let me simulate traffic coming to and from the ex-C&O branch that Buckingham currently runs, so I'm counting it as win. Watch this space for additional information as sawdust flys.
Posted by Rick at 9:02 AM No comments:

My schedule lined up last week and I was able to attend the NMRA National Convention that was being held in Cleveland, OH.

I have now attended the last 3 National conventions; 2012 in Grand Rapids, 2013 in Atlanta and now 2014 in Cleveland. Next year is being held in Portland, OR. Unfortunately, the late august timing of the convention conflicts with the beginning of the school year, so it won't work for me personally, but if you have the chance to go, I would encourage you to attend and experience a convention.

Venue wise, I think Cleveland's new convention center was the best venue from the last 3 conventions. It was clean, spacious, convenient to hotels, food and transportation links. The kicker is that it backed up to the NS (ex-Conrail line) and the RTA line, with nice big windows so a convention favorite was to get a seat, enjoy the A/C and watch trains roll by if you were between clinics.

I attended just a few clinics this time, less than I attended in Atlanta or GR. Primarily this was due to the clinics not being on subjects that I am interested in currently. From the clinics I did attend, quality was very good and talking to other modelers that attended, their feelings were very close to my own.

I did not partake in any layout tours, but did participate in a few operating sessions, as again the OpSig did a good job identifying layouts for sessions and getting everything set. The local coordinator, Scott Benson, did an outstanding job on that front and he was recognized at the meeting as well.

At the OpSig meeting, Steve Benezra, the current editor of the DO, announced to the membership that he will be leaving the editor post after 6 years of doing it. He had already informed the BOD, and his intention is to give us a year to find a successor, after which he will work with for another year to help he or she get started.

Of the layouts I saw, Bram Bailey's HO Scale Ontario Central Railway was absolutely outstanding. I was able to run the West Bay yardmaster job during the session and came away very impressed.

The pictures that I managed to take are in the gallery on the main site - here.
Posted by Rick at 8:56 AM No comments: