So, I needed another crossover before my upper level staging yard as I just know that trains will get put onto the wrong track by the dispatcher or crew and then the schedule would get totally fouled up as trains would have to run back to the nearest crossover so that it would be easy to get trains to either main track as they head onto or off the line.

My original plan was to build a more prototypical take on the Acca interlocking and pull the existing set of crossovers off the line to be reused before staging.

I got out my tape measure and did some figuring and came to the realization that doing that would just about monopolize the space I had, plus impact the ability for trains to have some room between Doswell and the next interlocking.

I decided to slide the cross overs closer to Doswell and make the entire thing a bigger plant versus two separate plants.

As I spun up to make another set of crossovers, I remembered that I had two quicksticks for scissors type crossovers that were included in the kit I purchased. So, throwing caution to the winds, I started the scissors.

I refreshed my memory on the directions from fast tracks and started working. Took me about 4 hours or so of time to finish the build and I have another 30 minutes of staining and gluing the ties on, but it is mostly done.

I kept the camera handy as I worked so I could document the process. Worked pretty good and I've put cork down today so this can hopefully get installed before I leave to head to the National NMRA Convention in 2 weeks. 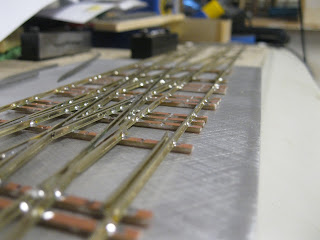 The upper level benchwork has been completed and is ready for track.

Homasote is down and painted.

The end of major construction is just about here and the end of tracklaying is getting closer!

Before the this last operating session, a small work session was held. Of course, with pictures being taken on the tablet, it complicated getting this update to the blog.

The last bit of benchwork for the upper level was complete, and the only thing thatremains on that front is to put down the plywood subroadbed and homasote roadbed.

Trackwork into the Doswell junction was worked, putting us closer to having the final staging yard in place so theentire railroad can be used during sessions. 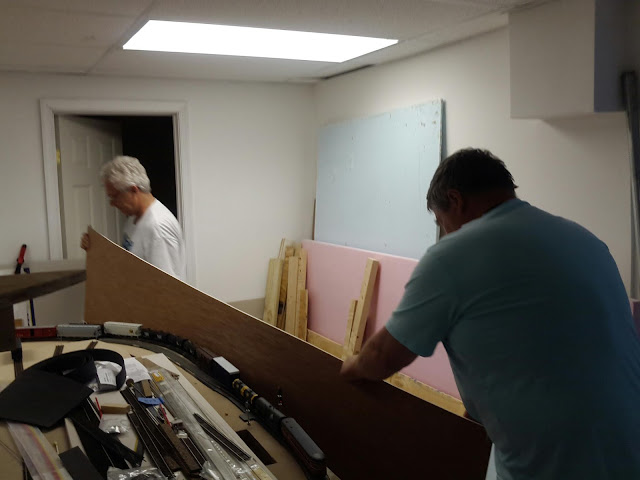 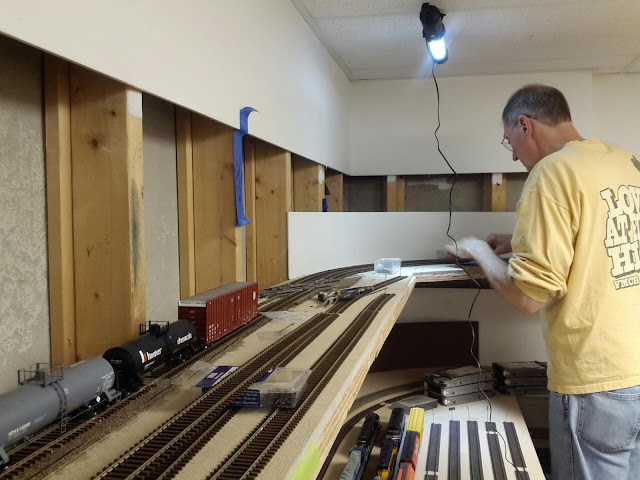 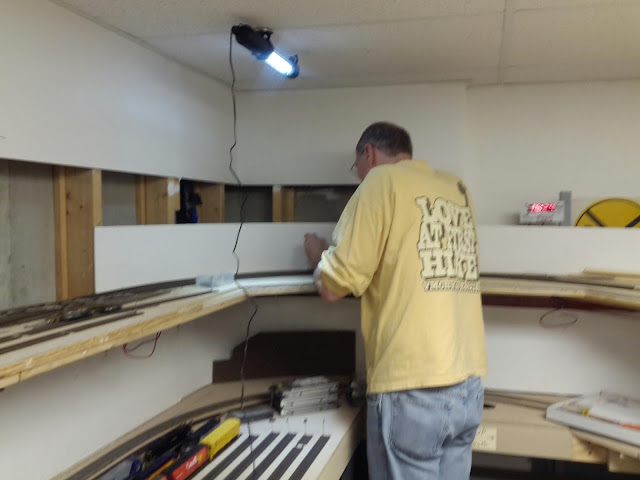 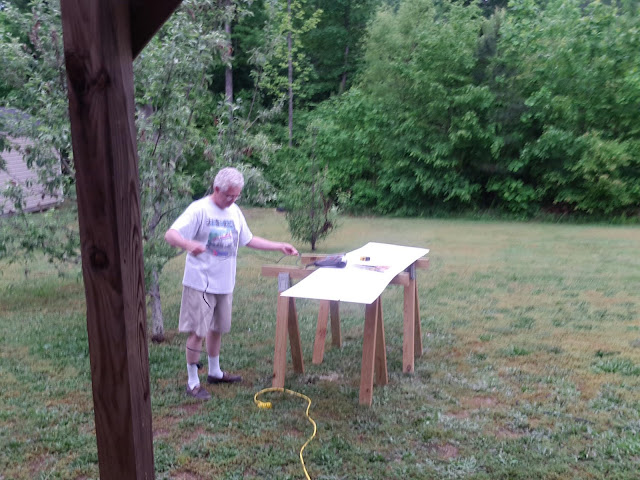 The June session is in the books and it went fairly well with respect to the fact that we hadn't turned a wheel in a session in a couple of months.

The crew were completely retreads; I'm pretty sure this is first session without any new folks to the railroad.

The crew was split 3/3 between local folks from Richmond and the crew from Charlottesville.

Pictures of the session follow. For some reason, the camera got turned to medium size pictures, so sorry about the lack of resolution.

Just a quick note to open June; I've got a staging session going Thursday night and then the full operating session on Saturday afternoon.

I will have one additional industry spot available on the upper level, assuming I get the turnout connected up in time.

Progress pictures will be posted later in the week, as they are on the tablet and haven't been uploaded yet.
Posted by Rick at 8:10 AM No comments: