The first operating session of 2012 has come and gone and the law of model railroading was proven once again.

The law is that nothing will fail until people are showing up for your operating session.

The computer that I setup mid week to run the JMRI panels worked perfectly without a single problem until less than 10 minutes before people started to show up for the session. This meant that we did not start the session until 1:45 or so.

We completed the entire schedule for the first time, so I would call the fast clocks a help for having the dispatcher and crews in sync on what needs to get done.

A bullfrog turnout throw on the south A/D ladder failed about halfway through the session, so it was flagged for rework and the yard crew worked around it as best they could. It has since been replaced by a blue point.

The yard crew did assemble the last local, F805, incorrectly. It wasn't discovered until the road crew arrived and walked the train, realizing that not a single car was for F805. This put the yard crew behind the eight ball and brought car sorting to a screeching, smoking halt. The Superintendent had noticed something wasn't right when a center beam lumber car was right in the middle of F805, but I figured that I should keep silent and see what happens. Fun times were had!

Learned a couple of new things on the signals - a script should be developed that sets everything to red and all turnouts to closed after the panels are loaded by the dispatcher; the yard exit signals can only be thrown after a train hits the block that is the yard approach so the signal logic can figure out that you want out instead of in. The crossovers signals need to be tweaked a bit as well, but that is good to know. Also need to put a delay on the drop to red for the signal that protects entering the yard from the south (you are headed northbound), since more than one engineer entered the block, saw the signal go red, and big holed the air to bring the train to a stop.

Also, angering the dispatcher will cause you extra delay. Just about every road crew can attest to this.

Next session is schedule for the 2nd Saturday in May, hope to see everybody then!

A few pictures, as I remembered to take pictures this time!

Keith looking deeply dispatcherish as he tries to figure out why he volunteered for such a job... 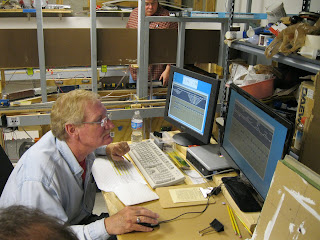 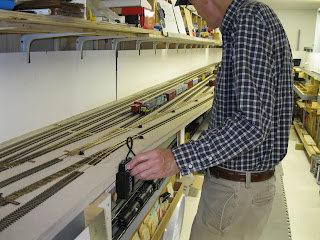 Please note, no resistor wheelsets have been deployed so far, so you can throw turnouts under trains.. Here some road crew clean up such an "oopsie" 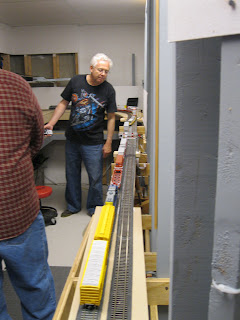 Mike P with his Patented Polish Pull and Push move: 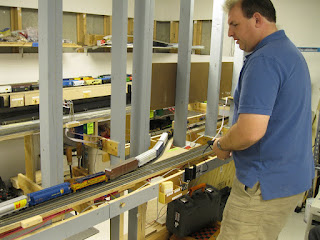