It was an interesting session with a few ups and downs, but all in all, we did fairly well.

This was the first session without help from the Division Assistant Supervisor/Chief Mech Officer. Doug and Keith P ran Acca Yard, Dick dispatched while Wayland and Charles were the road crews. Your host tried to play hostler and run trains, with limited success.

Ran a fast clock for the dispatcher only which seemed to help according to the Dispatcher, but there need to be visible displays throughout the railroad. The superintendent has that for action.

The computer running the JMRI panels crashed 3 or so times, prompting a PC swap mid session. The panel didn't transfer correctly to the other PC, so lots of icons were wrong, making it very challenging for Dick, but to his credit he stuck with it and made it work. The new monitor
looked good and put an end to having to scroll one way or another to see the entire panel.

Signals were mostly correct, but there is a need for some sort of Yard override so trains just don't show up in the yard, blocking anything southbound from leaving.

Traffic is way unbalanced, but that is probably more my fault than anything else. The outbound cars to the NS interchange have somehow disappeared. They aren't on track 5 as per SOP and they surely aren't on the interchange track, as I got a call from the NS supervisor asking where his inbounds were.. Oops!

Now, a few pictures, graciously provided by Wayland and Charles, as I was so busy that I didn't take a single snap! 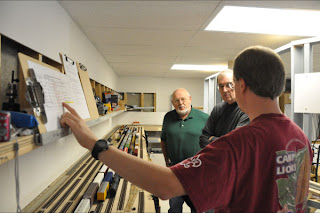 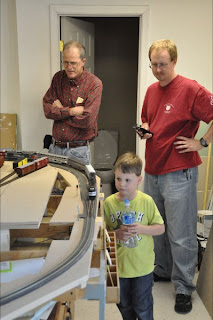 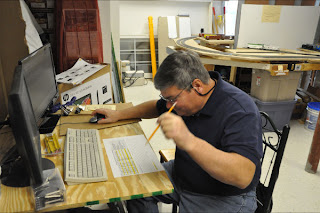