A work session was held this past Saturday, the 14th of September. Dick M was gracious enough to spend a few hours with your host to expend some work cycles on moving the main line closer to completion. Track was laid down on the approach to the staging yard after cork ramps had been sanded down to get the track to the level of the homasote. I spent my time installing a few additional signals controlled by a SignalMan from rr-cirkits. These signals are from blma, which uses magnet wire to connect to the LEDs. It is always challenging to connect these signals, as the magnet wire isn't labeled, so you get to play 20 questions with 'did I get the right wire? No, that is red, I needed green.' Of course you are doing this while contorted under the bench work. Some additional work to the jmri panel has been done to identify the detection blocks and move the CTC system closer to completion. 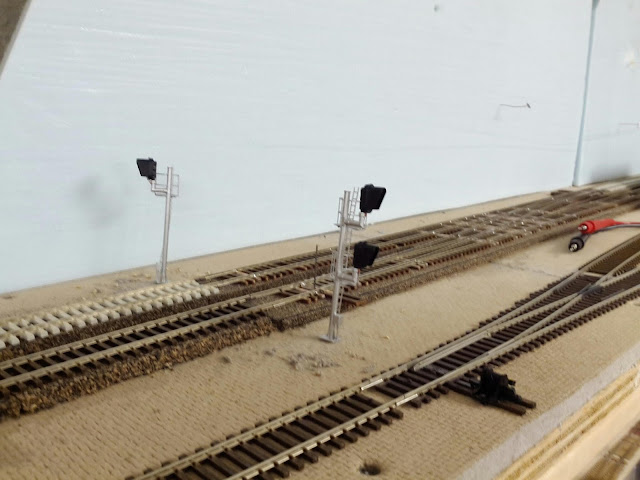 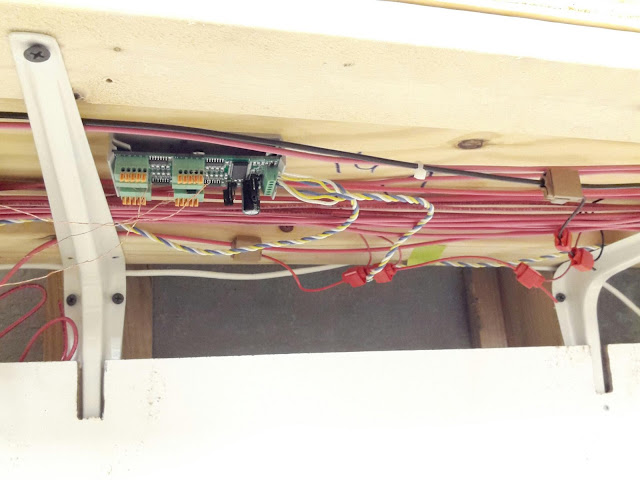 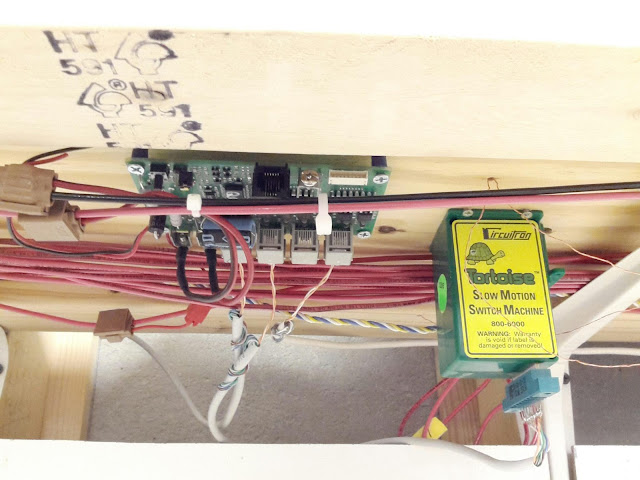 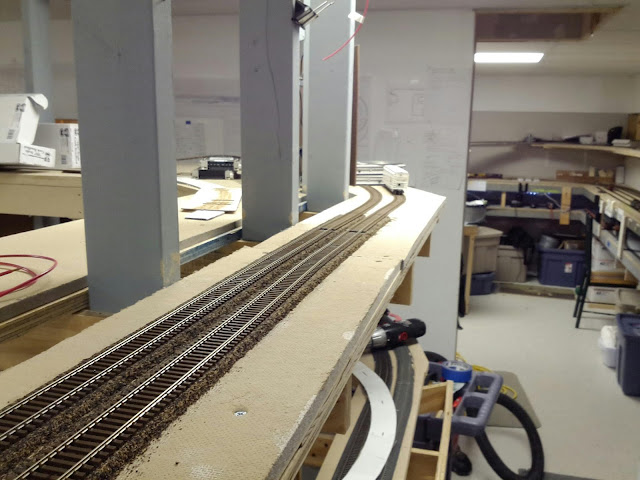 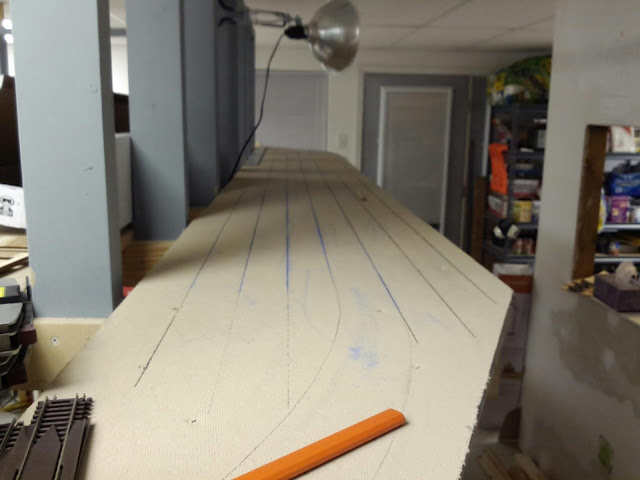 During the last session, or possibly the previous one, there was an instance where there was a short on DCC that took a while to resolve. During running trains some time ago, track power wouldn't come up for a couple of minutes. I spent some time messing with the electrical setup and discovered that I had 1 psx breaker feeding 3 BDL168s plus non-block detected areas including the yard. I purchased a couple more breakers with the goal to get things setup a bit more, um, rationally. I put the yard on a dedicated breaker and the used an additional breaker on the bdl that feeds the railroad between lower level staging and ACCA yard. One more PSX was installed and used to power the other 2 BDLs. The final breaker will be used to power the upper staging yard.
Also took the opportunity to clean up a couple of power supply issues and made a couple of supply wires with color matched shrink tubing. 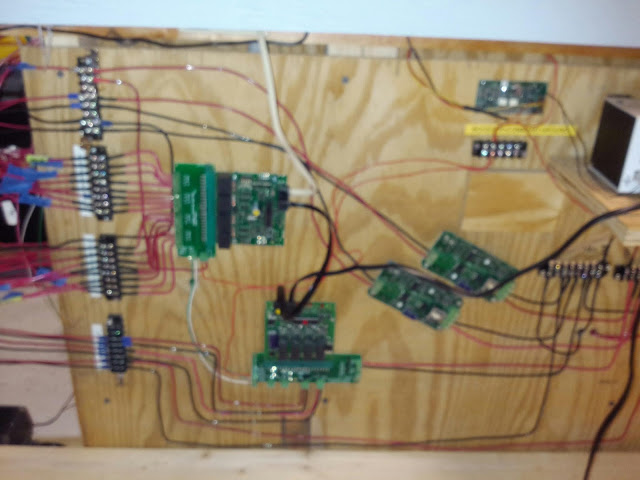 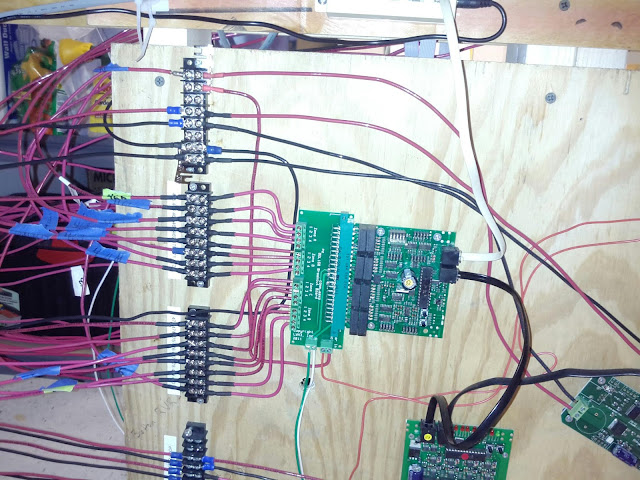 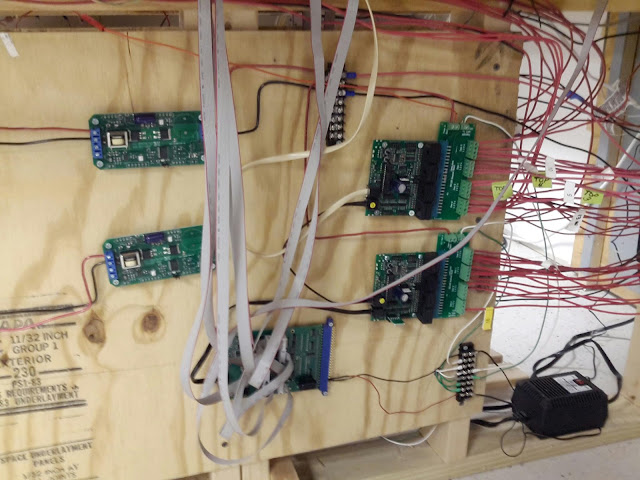 I have been talking about moving the dispatcher's area into the space underneath the stairs,but have been putting it off for multiple reasons, mostly laziness. I  had emptied under the stairs a while back and done some general "cleaning up" as well. That meant throwing out scrap wood, foam, homasote, and other su dry odds and ends. All that said, I moved the small cabinet to just outside the wall and did some measuring and thinking. Went ahead and began moving the desk into the stairwell and realized the opening is 38 and a quarter. The plywood I've been using as a top is (was) 38 and about 3/8s. Oops.
Out came the circular saw and rip fence. Trimmed about 2 inches off and started to put everything into place. The network drop I had on one of the outside stairwell walls is dead. Vaguely remember messing with it when I wired my house 7 something years ago, but looks like I will bring the network toner home and get that fixed. I ran a new run to get a loconet connection done; I had purchased a new complete spool of 6 conductor flat cable since my intention is to go through the layout and refresh a couple of questionable loconet connections. While doing so, I remembered how much I hate messing with drop ceilings. :-\
Discovered that I will need a better way to put monitors into the dispatchers new office if I get a larger monitor for the remaining 17" one, as the combo of the 17 and the 23 are just a hair larger than they can be to have them totally straight. I had to turn the slightly to get everything to fit, but I like the new look and it really opens up the railroad area. I also hope this will make crew utilization during sessions better as well. 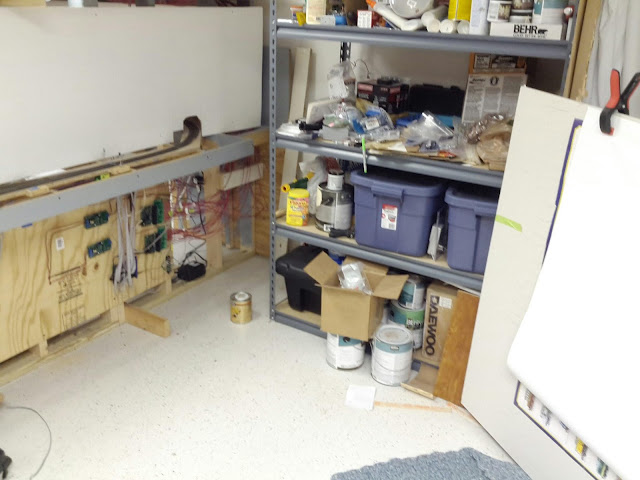 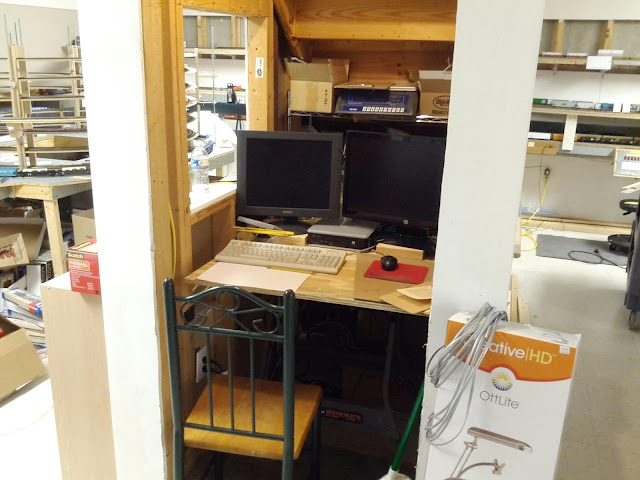 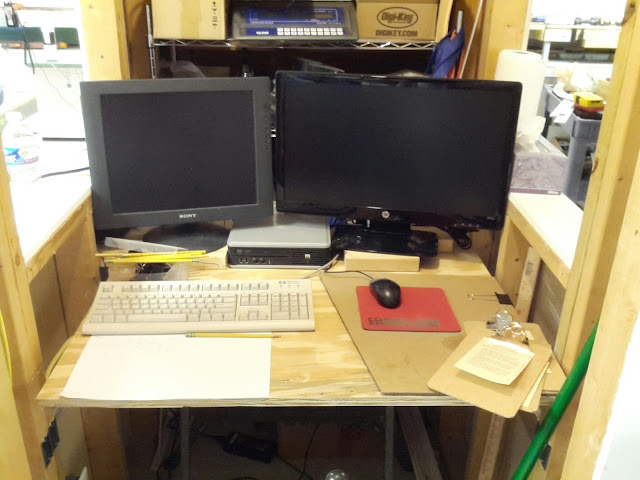 Coming to the End (of the main)

Finally had a weekend that wasn't promised to anything else for the first time in months. Did a bunch of different things, one of the first was to get the final pieces of mainline cork down and begin the process of sanding it down to a ramp as it enters the upper staging yard. Couple of quick snaps to give an idea of how it is going follows. Sanding cork makes boatloads of dust and cork/rubber pieces, so I will have to spend some time vacuuming in the next few weeks and probably do a complete clean before the next op session in October. 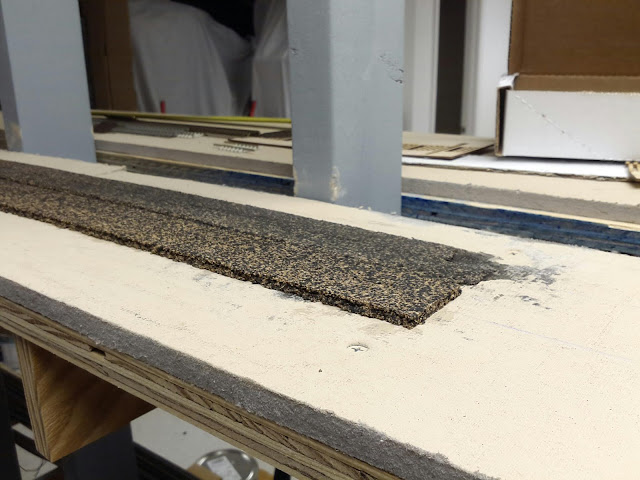 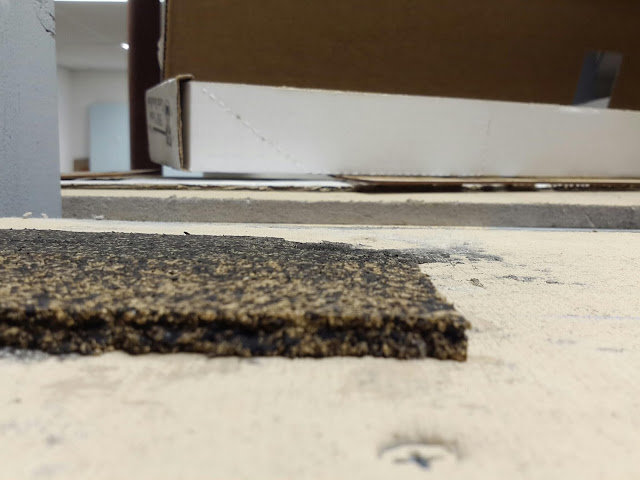 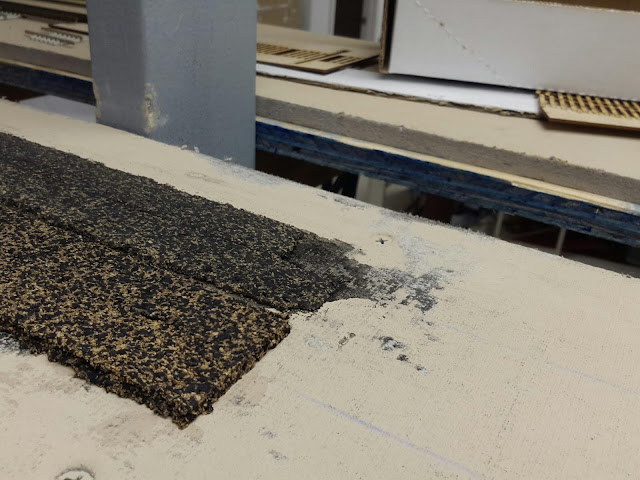